After we created our guinea pig in the previous step, it’s now time to integrate MoSKito-Essential into our application. Our plan for today is:

At the end of the guide we want to:

I. Mark classes for monitoring.

which is a simple DTO which doesn’t need to be monitored. We should monitor classes that actually do some job, have some payload. In case of a spring application, these classes should at least include Services and Controllers.

In general, everything that does something of interest should be monitored, but the ‘property holders’ classes shouldn’t.

To monitor our Services and Controllers, we are going to use the AOP Integration. We could also use Proxies or even Spring-aop, but AOP is the best right now.

To enable AOP Integration, we have to perform 2 steps:

We are going to add some dependencies to MoSKito artifacts in the course of this guide, so it makes sense to define a variable for version, to use same version in all artifacts, and to be able to change it easy. In our case the version is 2.8.5.

Add those lines somewhere in your pom.xml, preferably above the dependencies section, since this is where we’re going to use it:

and the AOP plugin in the build section.

Note: this guide was updated for 2.8.5. So you have to update moskito version in pom.xml.

However, we haven’t achieved much yet. We need to annotate the classes now. To do so, we open the ShopController, OrderController, HomeController and ShopServiceImpl classes  and add @Monitor above the class declarations, like this:

Your IDE should be able to suggest the right import for the @Monitor annotation, but in case it doesn’t, it is: net.anotheria.moskito.aop.annotation.Monitor.

After we made sure that build still builds, we can try to start the built application. We will see if it still works. The only new thing, after we open http://localhost:8080/burgershop/, are some new output lines in the logs, , like this one:

So, great, we now do have MoSKito integrated into our application, but we can’t see anything. Lets change this by connecting inspect.

To connect inspect we need to perform two steps: enable a connector inside our app and actually download and start inspect.

To enable MoSKito Inspect to connect to your application, we must start an endpoint in your application (which is in this case burgershop), and this is done by adding one dependency to the pom and one line to catalina.sh:

Now, please locate your catalina.sh (or bat) and add following line to it, right on top:

This will tell the MoSKito Inspect endpoint to accept incoming RMI connections at port 9401. You can of course specify another port.

So now we just have to download inspect from here: http://www.moskito.org/download.html or directly by this link. Note, you can always build your own MoSKito Inspect by simply putting the moskito-inspect-standalone war file in a servlet container of your choice, be it resin, tomcat or jetty. Just keep in mind that you will need a servlet3.0 compatible container, so tomcat5 or 6 won’t work. But for now let’s stay with our prepared download.

After you downloaded MoSKito Inspect archive unpack it somewhere. For example I did it under /opt:

MoSKito Inspect download is basically a tomcat with a war file, so you can start it like a normal tomcat:

Default port for MoSKito Inspect is 8088, simply because it seemed to have less conflicts as 8080. So you can access http://localhost:8088/moskito/

If you did everything right you will see this page a running MoSKito Inspect.

You can click around a little and celebrate 😉 But before you get too excited, what you see now is data from the MoSKito Inspect tomcat itself, not your burger-selling-app. To change it, you have to tell the Inspect to connect to the burgershop. Click on the producers tab (or any other tab). In the lower left part of the screen you will see a ‘QuickConnect’ box: 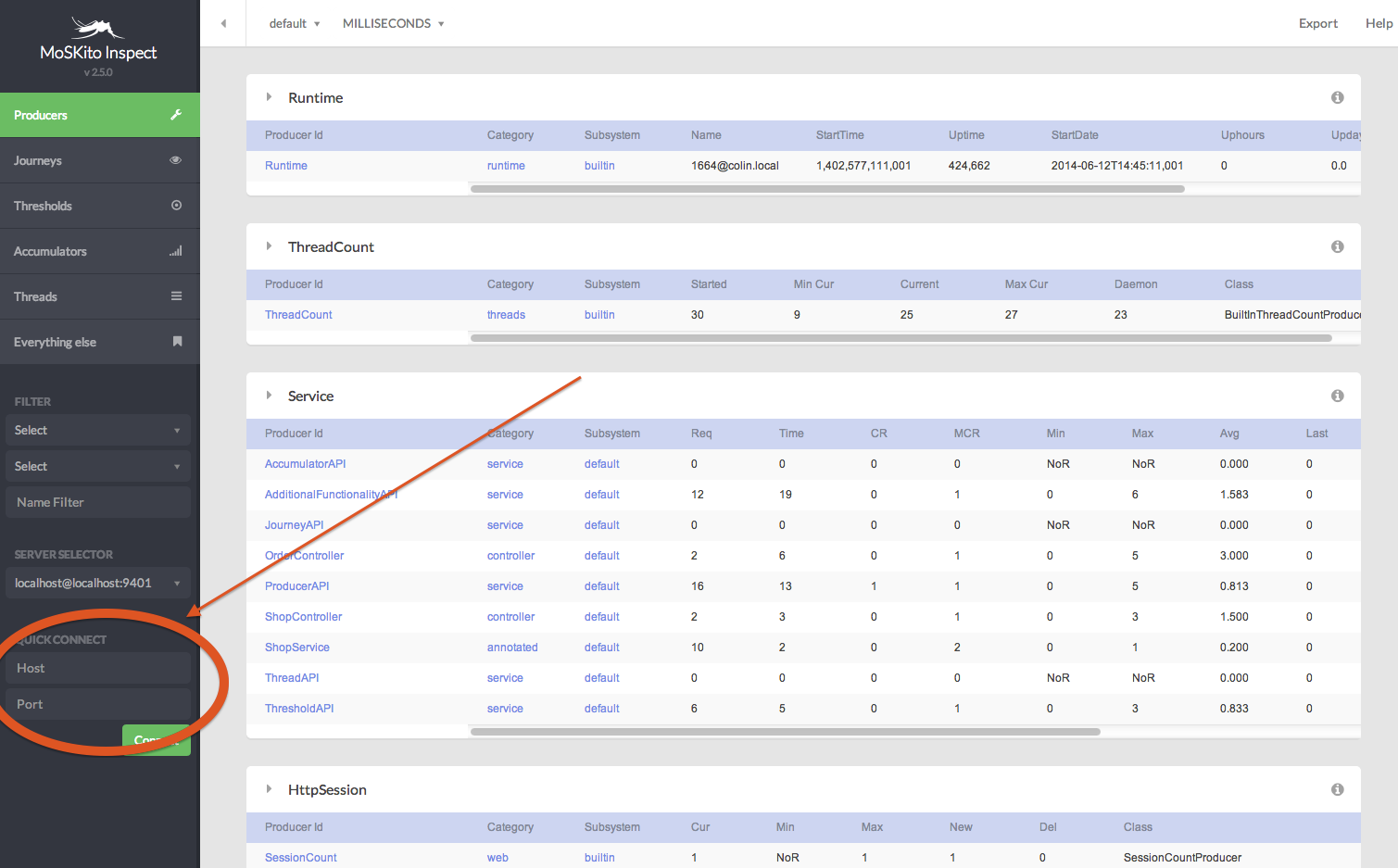 Enter localhost as host and 9401 as port and click Connect: 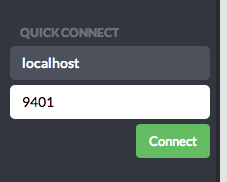 The screen should reload, and now you see data from your application. You can verify it, but clicking this url: http://localhost:8088/moskito/moskito-inspect/mskShowProducersByCategory?pCategory=controller

It will show you the previously annotated controllers and requests to them:

You can now make some orders in the shop and see the numbers increasing in the controllers overview.

We didn’t specify any category for the ShopService itself, so it will be under the default category for annotated classes which is … annotated: http://localhost:8088/moskito/moskito-inspect/mskShowProducersByCategory?pCategory=annotated

By adding the MoSKito Inspect Connector to our application we actually added some extra features, I would briefly describe here.

The built-in producers add some useful information about what’s happening in your app: 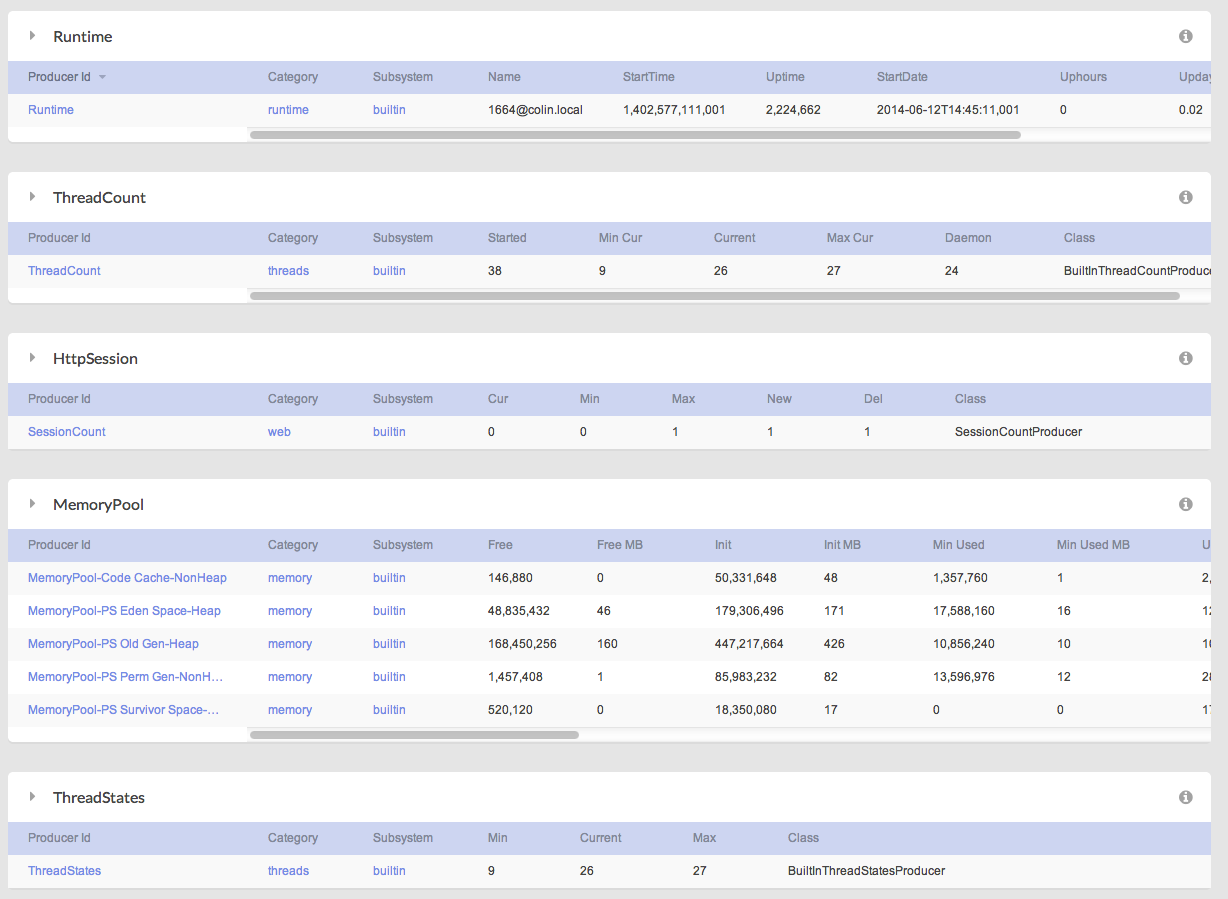 I will shortly name few:

Memory pools are collecting information about memory usage in different memory spaces, being it old generation or young generation. This is very helpful to detect potential memory problems.

Those give you information about different states that you threads are in, and the amount of the threads in each state. Typically you would like to avoid having threads in blocked state.

The current session count as well as number of created and deleted sessions over time.

But you will also get some accumulators ready to use: 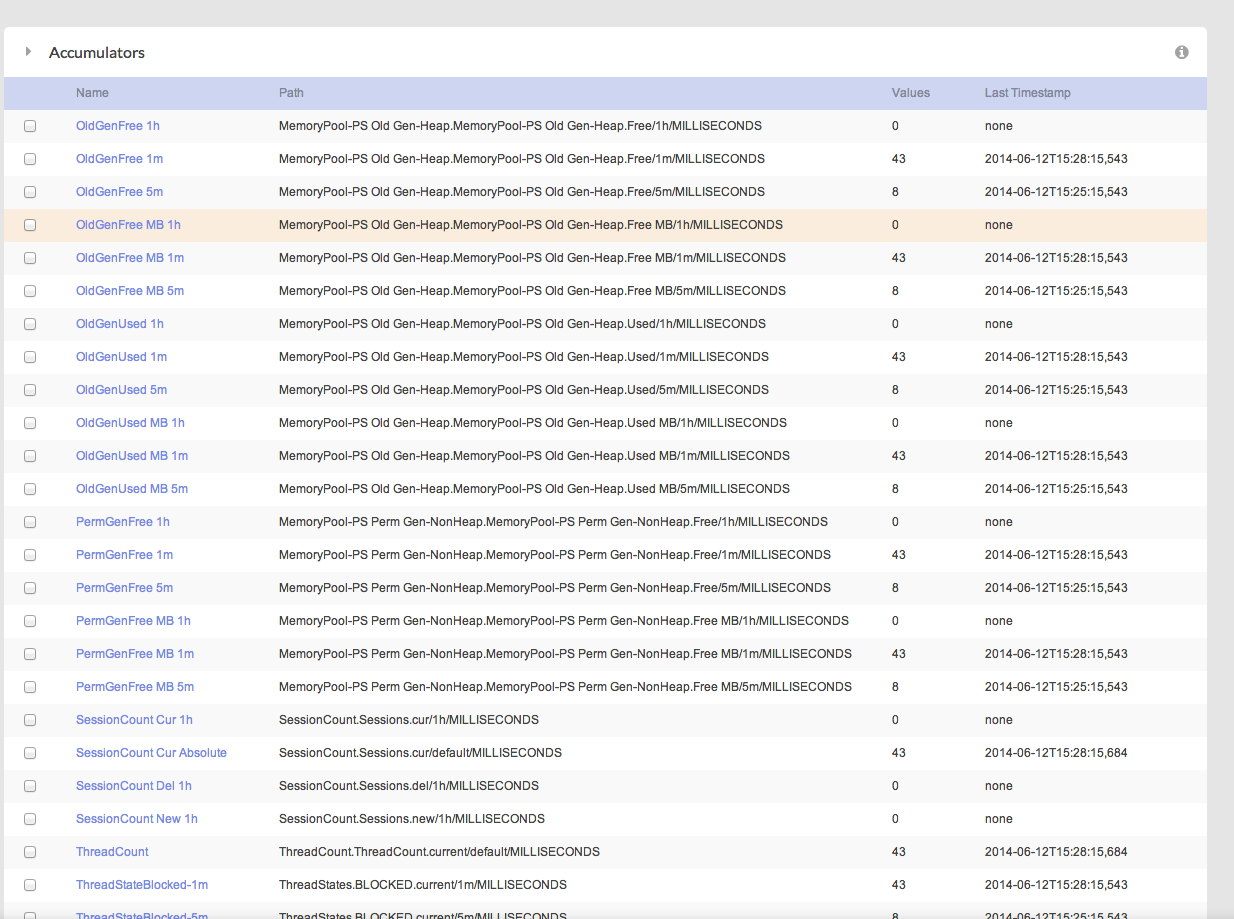 For example the development of your threads can be visualized out of the box:

MoSKito also tracks all called urls in your application and many more things.

But the real jewel are the journeys:

A Journey is a recording of user actions in the form of actual calls/steps that occur inside an application. Read more…

There are multiple ways to start the journey. One of the easiest is to supply a special parameter along with your request. MoSKito will check the presence of the parameter and record everything that happens in that user session.

To start our first Journey we call the Homepage of the Burgershop with the special parameter: http://localhost:8081/burgershop/home.html?mskJourney=start&mskJourneyName=GUIDE

The GUIDE journey will show up in MoSKito Inspect immediately (tab Journeys):

Now I can click in the application in one window and trace what it actually does in another. And the best thing is, the overhead of this production profiling is so minimal, that you actually can do it without harm to your users, what a normal profiler couldn’t do (or not named commercial products).

After performing a full order process (well in burgershop the whole process are three requests ;-)), I can see it at once:

I can click on one step and see all calls through all my monitoring stations (that is all classes annotated with @Monitor, configured with AOP or CDI, Filters, SQL-Interceptors etc) including parameters and return values:

Now we can see what is happening in our application when the order is placed: which Controller calls which Service, what the Service does. And how long it takes. And what parameters are submitted. And the failures (if any).

The Burger Shop is a pretty simple application, therefore there is not much to see in the above journey. But I’ve seen applications with journey’s length up to 10000 steps, and believe me: there are a lot of surprises in analysing such long calls.

The above topic should give you a brief idea of what the journeys are capable of. We will return to the Journeys in later steps, especially when we talk about the Analyze function.

So, what have we done today?

In the next chapter, we’ll be adding a Counter, a Producer with custom stats object, thresholds and accumulators. After that, we will add another server and put both servers into Live Monitoring with MoSKito-Control. And last but not least – we’ll set up MoSKito-Central.

Enjoy and see you soon!

NOTE: Guys thank you for your interest in MoSKito, but this blog is not a support forum, if you have a problem write to support@moskito.org or into our olark channel (on www.moskito.org) or open a github issue: https://github.com/anotheria/moskito/issues or a jira issue: https://jira.opensource.anotheria.net/projects/MSK (Jira requires registration but its free).