From time to time we are asked by the users of MoSKito, how to do this or that, and how to implement a specific use-case with MoSKito. This is why we started a recipes section in our documentation and now also on the blog. A recipe will describe how to achieve a specific goal.

So the original question which led to this recipe: “Lets say I have a process, some kind of job, which is running every x seconds, and I want to monitor the number of successful and unsuccessful executions, with least possible effort”. And here how it goes.

Setting up the example

First of all we created a simple example that demonstrates what happens here. The example can be found under module recipe in moskito-demo github repository under: https://github.com/anotheria/moskito-demo/tree/master/recipes/counter. First of all there is our daemon worker:

Note, that the manual starting of MoSKito Backend is only required, because the example is stripped to the minimum, it wouldn’t be required in a web-app, or with moskito-javaagent etc. Apart from that the Daemon just submits a new job to an executor service. So forward to the job code:

So after determining if our execution is a success or a failure, all we gonna do, is to call a method in a Counter. This Counter must be a magical class, right? No actually it is not:

So our counter class is just an ’empty’ class with two marker methods. And an annotation: @Count. This forces MoSKito to count all requests to every method in this class. I already wrote about counters a while ago: http://blog.anotheria.net/msk/one-to-count-them-all/

So now all I have to do, is to checkout the project and start it in my eclipse or intellij:

Now I go to moskito download page: https://www.moskito.org/download.html and download the latest version, start moskito inspect and connect to localhost:9401 (this was the port used in the call to StartMoSKitoInspectBackendForRemote).

If I go to the counter section, I can see my process already working and counting:

Click on the ProcessCounter leads me to the details: 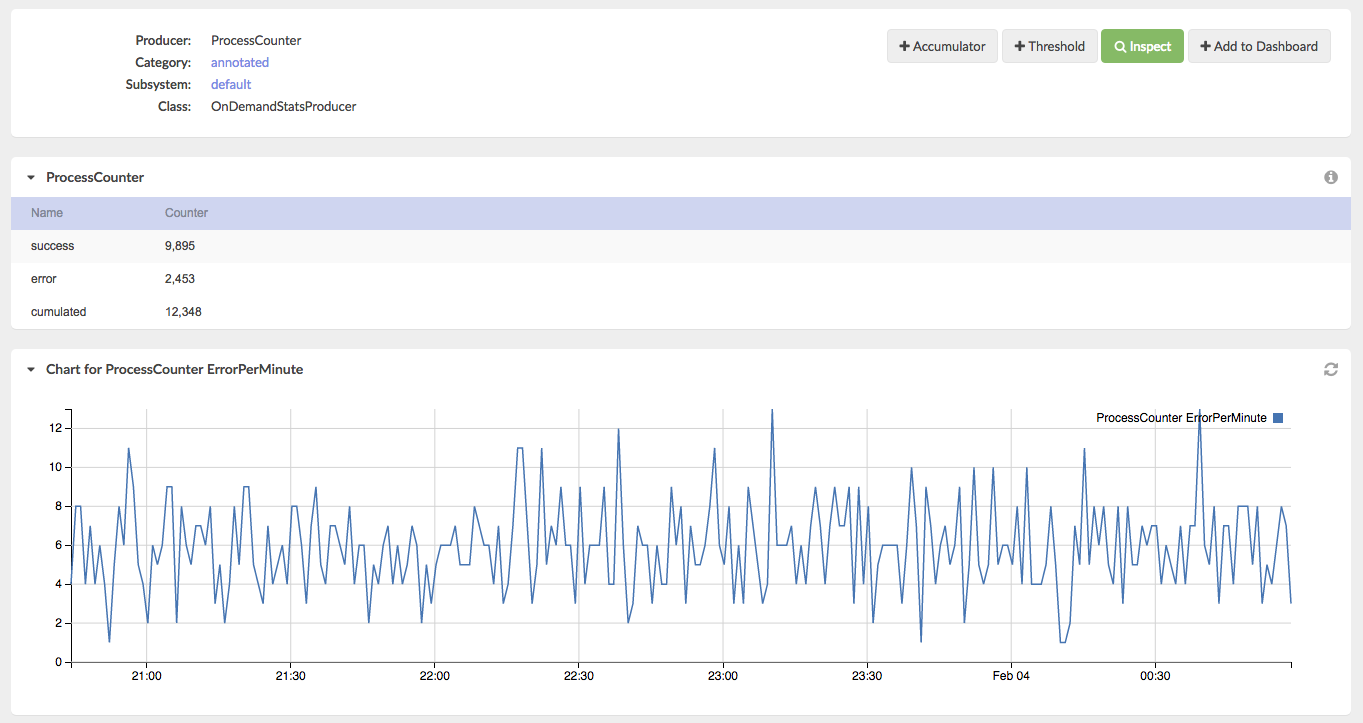 where I can see the success and error rates of my process.

Now, I am monitoring my process and its running, but I want to be able, to get more control, and build a dashboard. A new dashboard can be built on the fly in moskito-inspect, but to make it restart-safe (and change safe in version control) you have to put it in the config file called moskito.json. There is an example configuration file provided with the demo project.

My dashboard contains a threshold, a gauge and a chart. The gauge is just a visual help for me to determine if the current value is ok or not. It is based on the current error count:

Min value is obviously zero; right value is 50 (which I just thought out) and the gauge value is the number of errors in the last minute.

Similar configuration is used for the threshold. I spare you the details, but post a link to the example config file: https://github.com/anotheria/moskito-demo/blob/master/recipes/counter/src/main/resources/moskito.json.

Finally I have to put everything together to a new dashboard:

This is it. My fancy dashboard is ready, and everyone in the company knows how the process is running.

There is one more thing to mention, the original inquiry asked, if it’s possible to make a counter without annotation processing. Also annotation-based counters are really easy (basically just a shell of a real class), if you don’t want to use aop, for whatever reasons, you don’t have to. You can build it yourself also. We included an example of self-built counter in this recipe:

just replace the initialisation of the Counter to SelfMadeCounter in the Job class and you are done.

So, enjoy counting your process’s errors, and, more important, successes!